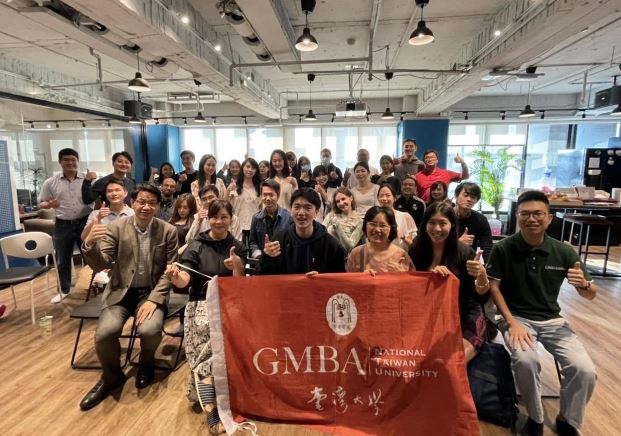 Loved by Gen Z, Dcard is the largest anonymous communication platform in Taiwan, to chat on current political affairs, love, food & drinking, entertainment, study and work, etc. On a sunny Sunday afternoon in late November GMBA Student Council held the last event of the year in collaboration with this famous Taiwanese startup. Special thanks to R10 Peter Chang, who pulled the resources and introduced Kytu, the CEO, giving GMBA students the chance to get to know more about Dcard. 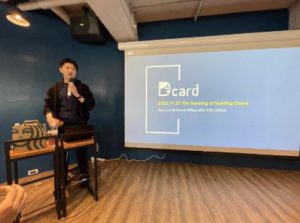 Given a small tour of the office, one could only be surprised by the open and light space, equipped with a snackbar 7/11 could only dream of (free of charge!), a regularly updated bookshelf and conference rooms called after the Dcard forums like ‘Disaster room’ and ‘Make up’ room. Entering the office taking shoes off and wearing slippers is a must, which only adds to the coziness one feels when entering.

However, when Kytu started his keynote, one couldn’t be any further from feeling sleepy and lazy as the impressive founding and expansion of Dcard was laid out before our eyes.

Dcard started as a small side project i  n Kytu’s undergrad days in 2014 to the 400 employees start-up it is today. In 2022, Dcard was listed as the third most attractive employer in Taiwan, right after Google and Apple and even before the Taiwanese industry giant TSMC. Kytu does not tie this success back to any benefits like more than average days of vacation or competitive salary, but for employees to be able to grow and learn with Dcard.

Dcard in numbers: more than 95% of Dcard users are within the age range of 18 to 24 with 2.5M of daily active users. Comparing this to Instagram, which has 9.6M daily active users in Taiwan mostly in the age range of 25 to 34, it is impressive to see how a local app can find its unique stance in the mostly internationally dominated Social Media space.

Kytu started Dcard with the ultimate goal to improve his own skills and living situation. After eating instant noodles for the first months of his studies, he realized he needed to find a source of income. He started to learn programming, digital design, taking small jobs on the side. During the weekends he would start coding Dcard with a few of his classmates, soon outgrowing the dorm and turning it into his full time job after graduation.

He found himself in the challenging position of hiring the right people to be in his team, calling himself a ‘newbie CEO’. Through failure and ‘blood and tears’ he learned that a great team consists of passion, diversity and shared goals. He introduced OKRs to the team – objectives & key results, which was first met with great skepticism, but ultimately leading his company to the point where it is today. It helped him to set challenging, ambitious goals with measurable results, allowing him to track progress, create alignment, and encourage engagement around measurable goals within the young company.

Kytu’s future vision for Dcard is to expand into other markets, add new services and tab into new age groups.

Thank you for giving us a glimpse into Dcard. We are excited for more collaborations in the future! 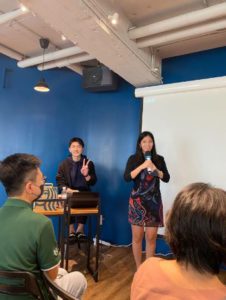